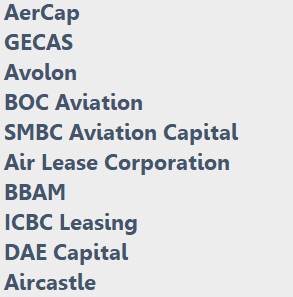 November marks the release of our latest Aircraft Interiors report – Aircraft Interiors 2020. As part of the report, we study lessors’ fleets, predominantly looking at the allocation of seats across their aircraft portfolio and how lessor ownership impacts the aircraft interior retrofit and spares market. Considering active and stored commercial airline passenger aircraft, we estimate that there are approximately 4.5 million passenger seats in the market today. This is split 2.15 million owned aircraft seats, and 2.25 million leased aircraft seats. As can be seen in Table 1 below, this follows the ownership trend of leased aircraft as of October 2020.

Other than seating trends, what is the shape of the leased aircraft market presently, and what aircraft have been more susceptible to inactivity? A further observation from Table 1 shows that airlines are proportionally favouring the operation of their owned aircraft compared to leased aircraft, although not as much as might have been expected, and not in narrow body aircraft. We suggest that there are numerous considerations for maintaining leased aircraft operations:

Airlines have sought lease rental deferrals with initial short-term periods up to six months, which are now likely to extend. A neutral agreement has been the deferral of underlying monthly rentals with airlines paying maintenance reserves against any used time or cycles on the airframe, engines, landing gear, APUs etc.; this is a typical lease agreement practice. Aside from those aircraft with remaining lease terms, lease expiries must also be considered as they represent a return opportunity for some operators; take for example Hi Fly Malta who will be discontinuing Airbus A380 services following three years of a lease, opting not to extend for an additional three years. Other severely hit markets are the Airbus A330ceo and the Embraer E190/E195 both of which delivered in high numbers from the mid-2000s. This timing is significant given a typical duration of first lease terms. Another type that could be considered, the 777-300ER, is an aircraft that we might expect to be under pressure when considering lease storage. However, we think it benefits from Emirates’ geographical position and fleet size, and the aircraft being less of a financial burden compared to its large fleet of A380s, with the ability to perform the same route network with a much-reduced capacity. This point somewhat holds for earlier 777 Classic aircraft too; take for example British Airways’ disposal of 747-400s whilst retaining some of its 777 Classic fleets. Table 2 identifies the stored leased percentage of the current total aircraft fleets.

Other aircraft trends impact the proportion of stored leased aircraft:

To conclude; what we see is an ownership structure that marginally favours owned aircraft, varying across the aircraft operation type. Re-entry to service of leased aircraft remains possible, particularly if there is a lease agreement in place, but could depend on operator financial performance or operator survival. The result could bring about a difficult aircraft remarketing period, and likely further retirements. We do believe that lessors have struck agreements with customers, and that a new level of lease payments are becoming the norm and this is being seen in recent lessor financial reporting from the likes of AerCap, Air Lease Corporation, and Avolon.