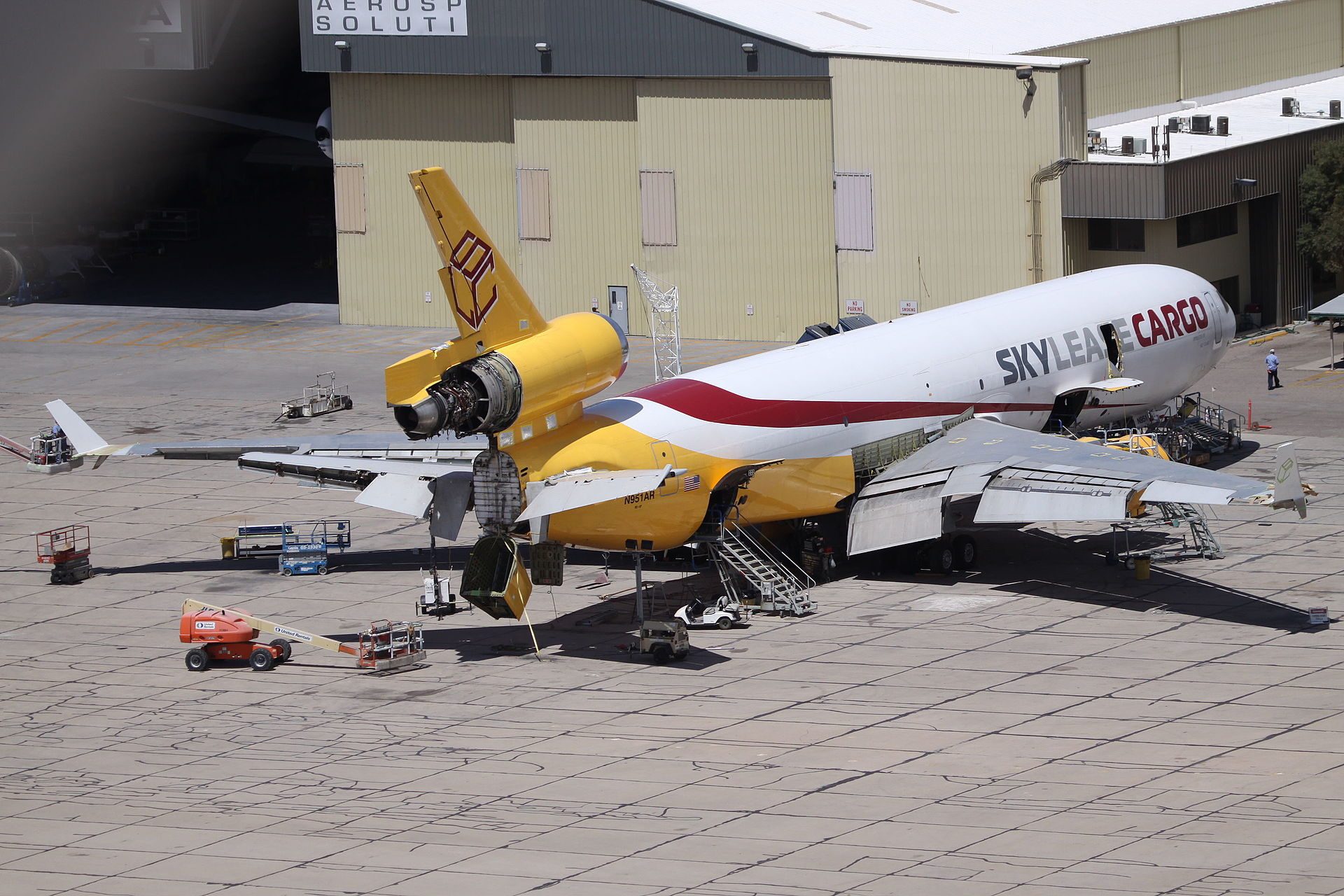 As 2020 approaches its conclusion, we want to wish a Merry Christmas and Happy New Year to our readers, subscribers, and customers. The Counterpoint Team hope you get to enjoy a well-earned break as we look forward to what we hope will be a resurgent 2021 for all. We are excited about the new year, and we hope that in-person events can make a speedy return. We leave 2020 with some of our views on the aircraft and engine Used Service Material market.

A prevalent acronym for discussion this year has been USM (Used Serviceable Material), with many predicting a surge in USM use due to the expected aircraft retirements following Covid-19, leading to increased serviceable material use during both line and base maintenance. The major benefit to this, of course, is the material cost compared to new spares, with surplus inventory likely diminishing part prices further.

USM is not new and observing OEM’s and MRO’s flexible power-by-the-hour offerings, we can see that used and repaired material is, and has been, part of the offering depending on customer preference. For example, GE Aviation has long offered USM during its engine shop visits. Historically, OEM aftermarket support providers and independent MROs have struck agreements with aircraft and engine teardown specialists for a guaranteed level of supply into their maintenance shops to support maintenance options. OEMs also have active trading teams who acquire available assets for their USM requirements, and similarly, so do independent MROs. Economies of scale are important, particularly when there is an abundance of long-term support agreements.

Presently, aircraft teardown specialists are not committing to regular aircraft teardown schedules because the end-user market demand has decreased as aircraft storage remains high, fleet utilisation is some way off previous annual levels, and operators have optimised fleets to reduce the expense of aircraft maintenance to preserve cash. At present, ‘Cash is King’. In the meantime, market participants have been relying on short-term engine leasing and component repair management for revenue, whilst preparing for a future market surge, taking advantage of the significant discounts available on available aircraft in the market.

Typically, the strategy of an aircraft disassembly specialist is to conduct necessary inspections to meet acquisition criteria before sales to the intended end-user. Before the aircraft is disassembled and even acquired, the expectation is that the specialist would have pre-sold enough inventory to cover the cost of the acquisition and disassembly. This first tranche of sales is almost always related to engines or engine components and landing gears. Component sales after that are profit margin. The specialist will not want to hold inventory in any great quantity for over six months.

During the process of disassembly, the engines are often the deal-breakers, as an opportunity for green-time leasing, part-out and material sales, or module swaps. Each is a practice that can be employed to reduce maintenance cost, gain full utility of an engine and its components, and reduce aircraft downtime. They are also practices we associate with mature and maturing aircraft as a factor in deciding on aircraft retirements and disassembly. For example, there is not a surplus of Boeing 787 componentry in the market compared to an Airbus A340, linked to the aircraft programme age and in-service versus retired fleets.

There are some, if not many, exceptions though because of component commonality that makes a disassembly viable. By this, we mean a component that is fitted on multiple aircraft or several engines. Taking an A340-200/-300 as an example; this aircraft was powered by four CFM56-5C engines and did not enjoy the success or longevity as some of its direct competition. The CFM56-5C4/P engine shares a high level of High Pressure Compressor (HPC) and High Pressure Turbine (HPT) commonality with the CFM56-5B with the later CFM56-5C4/P, being developed from the CFM56-5B/P. This particularly applies to parts such as HPC and HPT Life Limited Parts (LLPs) and material such as HPT blades. Today, brand new LLPs without discount cost approximately $1.8m for the HPC and HPT so used LLPs could represent a large cost saving. The life limited part cycle limit for these modules is 20,000 cycles, whereas, in the CFM56-5C, the cycle limits range from a low cycle limit of 13,700 to a high of 15,000. Flight hour to flight cycle ratios associated with long-haul aircraft meant that there was often good remaining cycle life on the CFM56-5C engines, which made them suitable for a shop visit run installed in a CFM56-5B engine. Acquiring the A340-200/-300 aircraft for the engines was a strategy to achieve impressive profit margins. Inherently, you get double the engines, and once disassembled, they can enter a volume market in the CFM56-5B.

The scenario above could also be applied to other aircraft and engine pairings, but the expected USM we hear about, and particularly with engines, mainly exists within the same engine family. To describe this, we again use the CFM56-5B family (one of the A320ceo powerplant engine options along with the V2500-A5). In short, the engine has had and is still expected to have a large requirement for engine shop visits. The earliest examples of the engines are around 24 years old, whereas the youngest are around a year old, with around 50% of CFM56-5B engines never having had their first run shop visit.

A reliable engine type, a CFM56-5B operating in a benign environment with a thrust rating of 28,000 lbf (and below), will likely reach a first shop visit at the point Life Limited Part replacements in the HPC and HPT fall due. This has been a feature of the CFM56-5B and -7B, strengthened by CFM’s investment in multiple performance improvement packages to improve maintenance cost and fuel burn, and as operators have a policy of engine re-rating (thrust) to gain addition EGT margin and time on-wing.

Analysing what is currently stored can help identify potential engines for retirement or alternative end-use. However, there are examples of aircraft in ‘genuine’ storage situations, ranging from lease returns to operator exits. The length of storage is often a telling indicator of the likelihood an aircraft remaining in storage, although again, during present times, anything parked as a result of Covid-19 impacts, remains a grey area. Further, CFM56-5B engines under 13 years old benefit from CFM’s first Performance Improvement Package (PIP), a later one occurring from October 2011 for all engines built after those dates. For the majority of these engines, we would expect service re-entry either with the aircraft or to displace an earlier CFM56-5B/P engine given technology, maintenance, and fuel burn benefits. 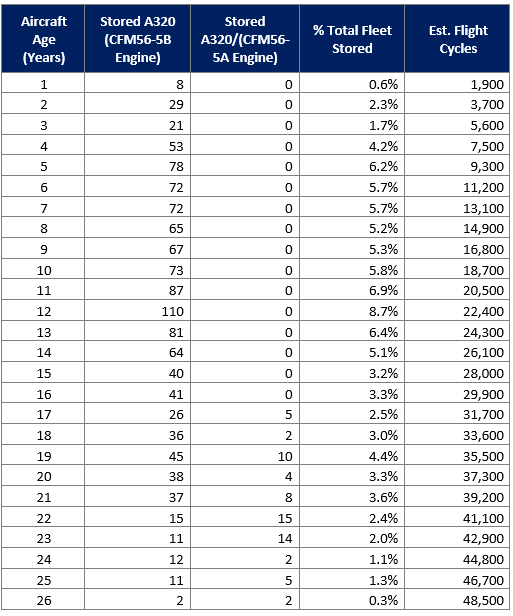 When assessing CFM56-5B maintenance, it is important to think of the module LLP life limits; Fan 30,000 cycles, HPC and HPT 20,000 cycles, and Low Pressure Turbine (LPT) 25,000 cycles. The reason for this is maintenance scheduling and to get the best time on-wing performance, a variable depending thrust ratings and operating environment. Using the most popular CFM56-5B4 engine (28,000 lbf), in the optimum operating environment, a 20,000 cycle first run is achievable. An operator is then likely to perform the additional LPT module workscope and LPT LLP replacements to enable the longer 10,000 cycles given that the restored exhaust gas temperature (EGT) should enable over 10,000 cycles if the Fan LLPs did not require replacement. This results in LPT LLP life waste of 5,000 cycles, although Fan LLPs will see full consumption at the time of the second shop visit. Referring to the table above, assuming an annual fleet average 2,800 Flight Hours with a Flight Hour to Flight Cycle Ratio of 1.4, many CFM56-5B4 engines would not be due a first-run shop visit until 10-11 years of service. At year 16, the Fan LLPs fall due, at which point, HPC and HPT LLPs will have ~10,000 cycles remaining, and LPT LLPs ~15,000 cycles assuming new LLPs were installed.

Some observations when considering maintenance practices on a CFM56-5B engine and other related engine market comments:

Concluding, USM is a solution for reduced engine maintenance costs, but it will likely need to meet certain life remaining criteria. There are numerous variables across engine markets that make USM use viable to the extent that each engine must be assessed individually for best suitability. We believe that populous single-aisle engines such as the CFM56-5B and V2500-A5 will see a better return to service with fewer retirements than what current storage figures could suggest. Twin-aisle engine markets could prove to be different, although there is the challenge of greater OEM influence on aftermarket services, and the question of who the key buyers of USM will be who also have twin-aisle engine MRO capability.